Objective: To observe thrombocytopenia in cases of Helicobacter pylori infection.

Place and Duration of Study: Department of Hematology, Armed Forces Institute of Pathology, Rawalpindi
Pakistan, from Feb to Aug 2016.

Methodology: A total of 150 patients who were all tested positive for H. pylori antigen were enrolled in the study. The patients were taken from the outdoor of medical OPD who came with the symptoms of gastritis, heart burn, pain and indigestion. But none of them were bleeding. Sample size was calculated by WHO calculator. Non probability consequetive sampling technique was used. They were from either gender and their age varies from eighteen to seventy years. Exclusion criteria was strictly followed. None of these patients were suffering from HCV, HIV which can lead to thrombocytopenia. They were enrolled in my study before the beginning of any treatment for their H. pylori. Previously they were also not on any type of drugs that are known for causing thrombocytopenia. Their H. pylori infection was diagnosed by antigen testing in stool and platelet count was measured in blood by automated haematological sysmex analyzer in all patients. Platelet count was also confirmed by manual count on peripheral blood film examination. Data was entered and analyzed by using SPSS version 17 and presented as percentages and frequencies. Post stratification chi-square test was applied. A p-value less than 0.05 was considered significant.

Conclusions: Patients with H. pylori infection show thrombocytopenia. Most of these patients are in their older age group. 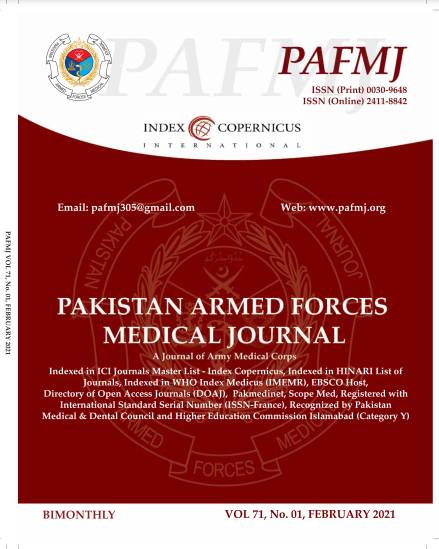