We have read, with great interest, the original article titled ‘Catheter-based renal denervation in patients with uncontrolled hypertension in the absence of antihypertensive medications (SPYRAL HTN-OFF MED): A randomised, sham-controlled, proof-of-concept trial’ published in ‘The Lancet’ (2017; 7: 0140-6736)1. In this clinical trial efficacy of renal denervation in patients with mild to moderate resistant hypertension has been demonstrated. Although previous trial ‘SYMPLICITY HTN-3’2 had confirmed the efficacy of renal denervation by keeping the patients ‘OFF-ANTI HYPER-TENSIVE MEDICATIONS’ and overcoming other limitations that were incriminated to be the probable causes of negative results of previous trials3. No adverse effects of the procedure occurred during or at the end of the clinical trial.

Letter to the Editor

We want to share our following views regarding this clinical trial. Results of a clinical trial with large sample size and that including patients from different ethnicities and races    have a greater impact on medical literature as compared to one with a small sample size. Results of such studies can be easily applied and are reliable. But during this clinical trial, the procedure of renal denervation was conducted only in 80 patients, which warrant further research related to this procedure. Although no adverse effects or complications of the method occurred at the end of this trial, many potential long-term complications that could have been detailed by long duration follow up might have been missed due to short follow up of three months. The study also didn't elaborate the potential adverse outcomes of the process or how the risk factors of this process can be minimised as for example the theoretical risk of renal vessel damage.

As there is no universal protocol regarding the modus operandi of renal denervation, the difference in the techniques and strategies of proceduralists while carrying out the procedure should have affected the results, which has also not been detailed in the study. Furthermore, there is no method to determine the degree of nerve destruction after performing this procedure and the differences in the extent of denervation among the candidates of research who had undergone this procedure, might have affected the outcome.

Although renal denervation is an evolutionary treatment option for resistant hypertension, the establishment of indications, contraindications, cost-effectiveness and potential short-, and long-term adverse effects is necessary before establishing universal protocol and guidelines of the procedure.

Although renal denervation can be a useful measure to control mild to moderate resistant hypertension in otherwise healthy patients, the establishment of the efficacy of the procedure in patients with co-morbidities and severe resistant hypertension would require further clinical trials. Moreover, in economically developing parts of the world like South East Asia, where health facilities and patient education are limited, the procedure of renal denervation would be challen-ging to carry out even in patients with resistant hypertension. For example in our country, Pakistan, National Health Survey estimated that hypertension affects 18% of adults and 33% of adults above 45 years old6. Multiple factors like poor awareness, unhealthy diet, urbanization and sedentary lifestyle among others, have resulted in significant increase in the number of hyperten-sive patients, those with uncontrolled hyperten-sion and those with hypertension associated complications7. On the other hand, among the patients who are on anti-hypertensive medica-tions, a significant propor-tion of approximately 23% was found to be non-adherent to their treatment in one study conducted in leading hospitals dealing with a substantial burden of cardiovascular diseases in Karachi, Pakistan8. Multiple factors like younger age, poor awareness and symptomatic treat-  ment are attributed as adversely affecting the adherence  to anti-hypertensive medications8. In Pakistan, like other developing countries, a significant number of patients are uneducated, and even a higher proportion of the population  is unaware of the risk factors for the disease. Under the conditions as discussed above a considerable amount of time, energy and econo-mic stability are necessary before introducing renal denervation as a treatment option for uncontrolled or resistant hypertension in the developing world. Before considering renal denervation as an alternative treatment for resistant hypertension, improving availability and quality of present therapy is necessary. Also before making it a standard treatment for resistant hypertension, more clinical trials should scrupulously assess it for adverse effects.

We think that under the circumstances as mentioned above lifestyle modification9, high-dose anti-hypertensive regimen, patient educa-tion and adequate adherence to medications would still be a superior mode of treatment for resistant hypertension. 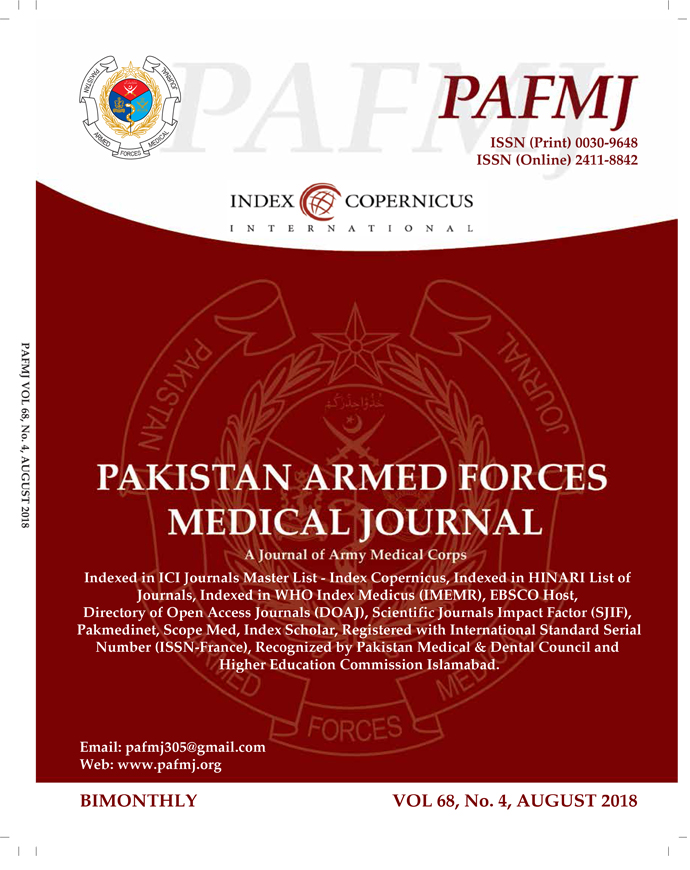